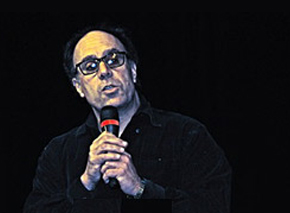 Theater alumnus Christopher Catt MFA ’75, a mainstay of the performing arts scene in the Staten Island area of New York, passed away on Wednesday, July 1, at the age of 59.

Catt, a California native, joined the faculty at Wagner College in Staten Island in 1995. As a professor in the college’s nationally recognized drama department he taught movement, directing and film, and prepared students for showcase performances. Over his career, he directed 175 productions of plays and musicals. Catt also worked professionally in New York City for 25 years, with many credits on and off-Broadway.

The website Staten Island Live reported that "...during his Wagner tenure, [Catt] served as Department chair for six years and directed more than 20 main stage productions, including “Jekyll and Hyde,” “Jesus Christ Superstar,” “Sweeney Todd” and “Tommy,” which he was slated to revive this fall.

"The doors of Wagner College’s Stage One theater were opened last Wednesday as news of Catt’s passing spread via phone calls and Facebook messages. About 70 people stopped in throughout the evening to console each other and reminisce about the high-energy creative force and champion of the underdog who was gone too soon."

"'This is a tragedy for the Staten Island performing arts community,' said Wayne Miller, artistic director for the Staten Island Shakespearean Theatre whom Catt directed in 2006 as Nicely Nicely in 'Guys and Dolls.' 'Everybody who knew Chris and worked with Chris had incredible respect for his abilities and talent.'"