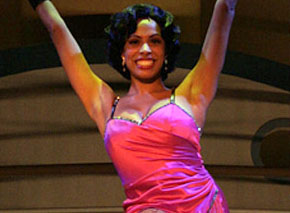 A senior in the Ray Bolger Musical Theater Program, Nicolette Robinson, and third-year MFA Theater Directing student James Darrah, are among this year's recipients of the prestigious Princess Grace Award.

Nicolette Robinson, who is entering her senior year as a Musical Theater major, has been a standout in the program since landing a role in the one-act “Sorry Wrong Number” in her very first audition.

Major roles followed in productions such as “Lysistrata,” and as an airborne Aphrodite in Mel Shapiro's world premiere production of the original musical “Homer in Cyberspace.” Her performance in the 2009 Ray Bolger Musical Theater Production “Anything Goes” was an exhilarating show-stopper.

In his letter to the Princess Grace Foundation recommending Robinson for the award, the head of the UCLA Ray Bolger Musical Theater Program, Gary Gardner, said that while “blessed with an amazing talent, yet humble enough to remain hungry for instruction and guidance, Nicolette displays a work ethic rarely seen in contemporary theater students.”

As her studies continue, Robinson’s professional career continues to develop: Last summer she played the role of Andrea in Reprise! Theater Company's production of “Once on This Island,” directed by Billy Porter, for which she and her cast-mates received a 2009 NAACP Theater Award nomination for Best Ensemble. She completed her second Equity production this summer as Ronette in The Peterborough Players production of “Little Shop of Horrors.” Recently Nicolette sang at Dodger Stadium, sharing the bill with Chaka Khan and Jennifer Hudson. She is a Jackie Robinson Scholar and a member of the nationally known singing group Awaken A Cappella. Television credits include guest-starring role on CBSseries “Cold Case” and Disney Channel's “Petstop!”

James Darrah came to the UCLA Theater Department specifically to work toward a career as a director of opera. To that end he has collaborated on works of Mozart, Purcell, Brecht/Weill and Verdi. His 2008 Opera UCLA production of Gian-Carlo Menotti’s “The Medium” has been described as a revelation, “making a familiar work a breakthrough experience.”

“A major point about James,” says Michael McLain, Area Head of the Theater Directing program, “is that as an opera director a large amount of his work has required collaborations between the UCLA Theater and Music Departments. Through James, the two Departments have been drawn closer together and embarked on several collaborative projects.”

Darrah is a graduate of the University of La Verne, trained with the Croatian National Theater and the Split Summer Festival and has directed plays by Euripides, Sophocles, Shakespeare, Calderón, Genet, Orton and Churchill. His most recent credits include direction and co-costume design for Purcell's “Dido and Aeneas” and a re-imagining of Jason Robert Brown's musical “The Last Five Years” (both for Opera UCLA), work as assistant director with Peter Kazaras on “Le nozze di Figaro” (Opera Cleveland) and with Stephen Wadsworth for “Agamemnon” (Getty Villa Museum).

Darrah’s future projects will include a new production of Poulenc's “La voix humaine” in Los Angeles, work as assistant director for Handel's “Ariodante” (The Juilliard School), co-production design for Cavalli's “Giasone” (Opera UCLA) and stage direction for the US West Coast premiere of Jonathan Dove's acclaimed contemporary opera “Flight,” which is based on the same real-life events at Steven Speilberg’s film “The Terminal.”

The Princess Grace Awards for theater, dance and film continue the legacy of Princess Grace (Kelly) of Monaco who, during Her lifetime, anonymously helped many emerging artists pursue their goals. This year’s 22 Award winners will travel to New York City as guests of the PGF-USA, where they will receive their Awards at the annual black-tie Princess Grace Awards Gala, held in the presence of HSH Prince Albert II of Monaco, on October 21, 2009 at Cipriani 42(nd) Street.