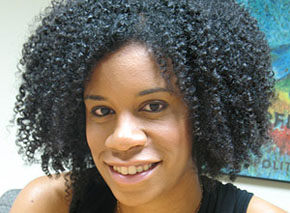 Currently in her first year, an MFA playwriting student at TFT has been named the first recipient of the Beverly J. Robinson Memorial Fellowship for Playwrights. World Arts and Culture graduate Erica Jones '09 will also see her play "Gross Sales" staged this fall as part of the Theater Department's annual New Play Festival.

The Robinson Fellowship was established to honor UCLA Professor Beverly J. Robinson, scholar, folklorist, author, producer, writer and director. From 1978 until her death in 2002, Robinson taught a legendary survey course in African-American theater which scores of graduate and undergraduate students attended each Friday afternoon. She also served as a consultant on such films as "The Color Purple," "Coming to America" and "Miss Evers' Boys."

As a playwright, Erica Jones is walking a very different path than the one that seemed to be marked out for her in her early years. At age 7, during a performance of the musical "42nd Street" she attended with her mother, she fell in love with the idea of dancing in front of an audience. “I knew immediately that I wanted to be up there, doing that,” she says.

Jones was already appearing professionally with the famed Alvin Ailey American Dance Theater when she joined the World Arts and Cultures (WAC) program on a dance scholarship. “I soon decided that I wanted to be challenged more academically," Jones says of her decision to pursue scholarship and folklore studies. "I wanted to be able to write and do research and focus less on dance performance, because I had been doing that for so long.”

When Jones began working with words and ideas at WAC, an earlier ambition resurfaced. "When I was a kid," she recalls, "I always wanted to be a writer, but I never had time, because I was always taking dance classes and going back and forth to rehearsals. So I was in this world where I had to express myself without using words, and I was frustrated. I wanted to go to school for writing for my undergrad, but a dance program was what gave me the best financial aid package.

"And then in my second quarter at UCLA, I took Gary Gardner's playwriting class. I sat down to write, and I don't know how it occurred, but it just flew out of me, like years and years of pent-up energy rushing out."

Jones says playwriting is her most natural form of expression, because her impulse to write is so strongly centered on dialog, on the way her characters talk to each other.

"I am definitely inspired by the people I know," she says. "My first play 'The Lesser of Two Weevils,' was based on a sisterly relationship with my best friend, the way we are with one another and how we talk to one another. And 'Gross Sales,' which will be in the New Play Festival, is a story about four women who work at a high-end makeup counter in the Glendale Galleria. Basically it is a fight to the death to see which of these four will be the best salesperson in the company and win a prize, which is a trip to Monaco. Mainly it is a spree of back-biting.”

"I could say," Jones continues, "that the play is a comment on corporate America in retail. But really it was inspired by my own life. I worked in retail and I had friends there, and there was some friction. I had another friend who told me about working in a boutique in Beverly Hills. And I spent some time working as an assistant wardrobe stylist in Hollywood. I would have to go to Barneys and Neiman Marcus to pick up clothes, and I had to interact with a lot of ladies who were uptight and miserable and very, very fashionable. So 'Gross Sales' is my send off to the girls in retail."

The experience of participating in the first production of a play she has written has only confirmed Jones's belief that she is on the right track in her writing career: "Writing a book would not be the same as doing a show and forming a community of artists and actors. I love theater people. I was attracted to that from the beginning. There was a reading of 'Gross Sales' in which this fantastic actress, Nikki Macauley, played one of the major roles, and when I heard her voice it totally changed my thinking about the play. I started trying to turn the ship around mid-voyage to capture that. I just love that collaborative experience. That's what I want to be a part of."