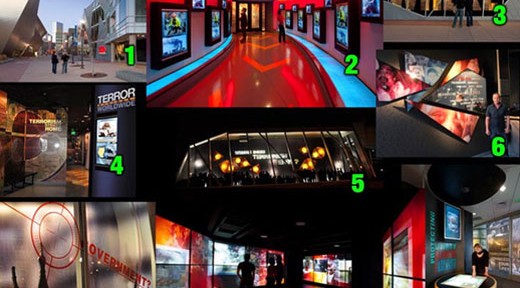 A veteran video director and title sequence creator, alumnus Todd Brunelle '86, won an Emmy in 1993 for his graphic designs for the FOX TV series “Front Page.” His most recent project, an innovative, video-driven museum installation on global terrorism, applies the skills he acquired at UCLA in unusual and socially enlightening ways.

This new phase of his career began when Brunelle created the animation and graphics for five award-winning feature films produced by The Museum of Tolerance in Los Angeles. On the strength of those efforts he was hired, in February 2008, to create a video for the Museum's sister institution in Denver, The CELL, an acronym for the Center for Empowered Living and Learning.

“Ultimately,” Brunelle says, “the museum directors liked my video enough to hire me to create the look and feel of all media throughout the museum. Shortly thereafter I was given the task of designing the display spaces — ten separate areas including a surround movie arena and seven exterior window displays. I had to pull out all my skills to accomplish this, filmmaking, editing, animation, set design, lighting and sound design.”

This “Museum of Terrorism” is centered around exhibition spaces which identify the roots, history, causes, and prevention of terrorist attacks. Brunelle’s design includes high-definition videos projected throughout the Museum. The CELL’s most innovative feature is a simulated terrorist attack, projected on 30 surround screens designed specifically for this purpose by Brunelle.

“And now that I have somehow become an expert on terrorism," he adds, "I am directing a video for Homeland Security.” aaaaaa