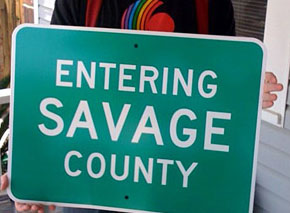 Alumni David Harris MFA ’08, writer-director, and Justin Wolske MFA ’08, producer, are whipping up a batch of grits ‘n’ gore in their new online horror production for MTV. “It’s a web series,” Harris says, “fifteen episodes that, viewed end-to-end, equal a feature. So this is basically a first feature for me, and I’m pretty excited.”

“the 15-webisode program will employ many of the local crew members who worked on Memphis filmmaker Craig Brewer’s similarly Web-based “$5 Cover” [co-produced by Harris], which made its debut online and on MTV in April after being shot there last summer."

"A horror series without the “reality drama” component of “$5 Cover” (in which local musicians played fictionalized versions of themselves), “Savage County” takes place over a single weekend in a small Texas town where a group of high school kids “unleash the ire of a killer hillbilly clan” after a ring-and-run doorbell prank turns deadly, Harris said."

"The pilot for “Savage County” was shot in California, and Harris originally intended to shoot the series in Texas. But his “$5 Cover” experience convinced him to return to Memphis."

"'The thing for me was seeing the amount of talent that Craig mobilized,' said Harris, a Texas native who now lives in West Hollywood. 'The community seems like it is underutilized. You’ve got a town with a bunch of talent and fantastic locations.'"

"'Unlike ‘$5 Cover,’ we’ve got the production demands of dismembering people,' Harris said."