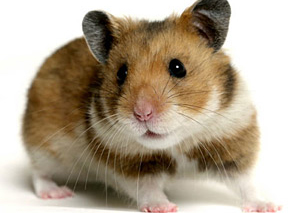 "Etienne!" is the "Little Miss Sunshine" of indie hamster films

In an “Indie Focus” item headed “My furry friend,” the “Los Angeles Times” annoints the first breakaway rodent hit of 2009.

Produced by UCLA Producers Program alum Giacun Caduff, publicized by Kathy Cabrera MFA ’08, and co-starring Caveh Zahedi MFA ’92, writer, director and star of “I Am a Sex Addict” (2005), “Etienne!” is a wry yet heart-warming inter-species bromance.

"After its world premiere at the recent CineVegas Film Festival, 'Etienne!' picked up the Filmmaker to Watch Award and was dubbed 'the unofficial feel-good film of the fest' by 'The Hollywood Reporter.'"

"The feature debut from 26-year-old filmmaker Jeff Mizushima, “Etienne!” tells the wistful, whimsically heartfelt story of Richard (Richard Vallejos), who takes his pet hamster on a cycling adventure through Northern California when he learns the little creature has a fatal disease. Along the way, they intersect with Elodie (Megan Harvey), a recent college grad with issues of her own."

"'The real reason I had a hamster was the absurdity of it,' said Mizushima during a recent phone call from his home in Torrance. 'But then it turns out a lot of people who worked on the film had hamsters and it strikes a chord with people.'"

"By turns melancholy and hopeful, with its vintage-inspired sense of style — think striped shirts and running shoes for guys and knee socks and simple dresses for girls — and specific feel for objects and locations, “Etienne!” plays as an accessible thrift-store variation on the fastidiousness of Wes Anderson. The soundtrack features a mix of old-school French pop, new tunes composed to sound like French pop and a few songs performed on screen by the duo Great Northern."