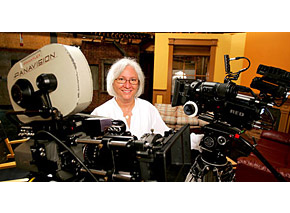 Teri Schwartz looks to the future

"Los Angeles Times" profiles the new dean of the UCLA School of Theater, Film and Television

“Is humanism in film dead?” asks “Los Angeles Times” reporter Rachel Abramowitz, as a lead in to her July 6 interview with Teri Schwartz, the newly appointed dean of the UCLA School of Theater, Film and Television.

“Humanistic storytelling” is a phrase that recurs throughout the insightful interview with the successful film producer of “Nuts” and “Sister Act,” who has been applying her skills to education for the past six years as the founding dean of the Loyola Marymount School of Film and Television.

Here is an excerpt from the article:

"One of the producer-turned-educator’s main goals in taking over the reins of one of the top film schools in the country is to promote entertainment that “nurtures and enlightens and entertains and hopefully inspires change for a better world,” says Schwartz, defining humanistic storytelling. “The great film and theater institutions have to figure out how to embrace and marry together story, humanism, global diversity, civic responsibility and technology. A great school takes on the big questions of the time and builds stories around that. Technology is in the service of story, not the other way around."

"'If we do our job right, then students will be mindful of ethical choices they make in storytelling,' says Schwartz, though she adds, 'I’m not here to dictate what somebody’s values and morals are. If you have a humanistic point of view, you’re just mindful of the world and are empathetic to others.'"

"Schwartz believes ardently in the classic basics of film education — namely, the ability to tell a coherent and moving story. 'The way we’re experiencing media now is very different from when film schools first started in the 1960s. We won’t betray our classical roots, though. When you look at the great painters — Picasso and Braque were classically trained. They invented Cubism, but they could still classically paint,' she says. 'Remember, the technology changes every other Tuesday. The education has to be anchored by a timeless, universal piece which is storytelling, humanistic storytelling.