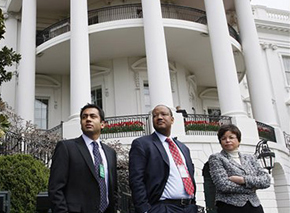 The annual Festival of New Creative Work is a nine-day celebration of the newest work coming out of the UCLA School of Theater, Film and Television. Attendees enjoy more than 100 films, presentations, readings, and panel discussions throughout the UCLA campus and Westwood Village.

Festival highlights each year include the evening events that focus on the work of students in each of the School’s signature programs. At Animation Prom, Directors Spotlight, Producers Marketplace and Screenwriters Showcase, distinguished professionals are honored guests and the best work of our graduate and undergraduate students is celebrated.

“Actor Kal Penn started a new job Monday (July 6) as a liaison between the White House and Asian communities,” reports the Associated Press.

"The Indian-American actor is taking a break from Hollywood to work as an associate director in the Office of Public Liaison, with a focus on connecting President Obama with the Asian-American and Pacific Islander communities, as well as arts groups."

"Asked about the differences between the new job and his work in Hollywood, Penn joked that he now wears a suit. When pressed about preparing for his first day on the job Monday morning, he said, 'I brushed my teeth; I did floss, used mouthwash … took the bus to work, same thing that everybody does.'"