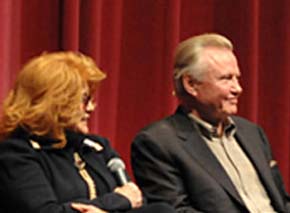 "Lookin' to Get Out" has star-studded Archive screening

The UCLA Film & Television Archive’s recent special screening of the newly discovered director’s cut of “Lookin’ to Get Out,” the late director Hal Ashby’s classic 1982 comedy, drew an overflow crowd and an impressive array of filmmaking talent to the Billy Wilder Theater in Westwood.

Jon Voigt and Burt Young play two inveterate gamblers in the film, making one last grab for the good life in Las Vegas after a series of setbacks.

The performers were joined on stage by co-screenwriter Al Schwartz, Ashby biographer Nick Dawson and Oscar-winning cinematographer Haskell Wexler (for Ashby’s “Bound for Glory”). Wexler was awarded the UCLA Medal for 2009 at the School’s commencement exercises in June.