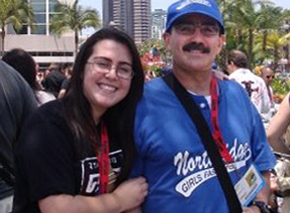 By Jonathan Kuntz
San Diego’s Comic-Con, created in 1970 as an annual event for a few hundred fans to trade comic books, while discussing science fiction and fantasy, has grown into a pop culture Sundance that sells out months in advance to 125,000 attendees, with a guest list that challenges Cannes. Over the intervening years, the "Spider-Man"/"Lord of the Rings"/"Harry Potter" takeover of the Hollywood blockbuster, replaced now with the far more profitable tent pole franchise, multi-part media event, has caused San Diego to become the crucial launch pad for upcoming films, TV shows, games and many other forms of cult cultural media.

The idea of viral marketing, exemplified by the preview of "Iron Man" at San Diego two years ago, which was credited with boosting that film to stratospheric grosses, has caused the global media companies to stage major events at Comic-Con, supplicating the fanatic attendees with previews, superstar appearances and “convention exclusive” merchandise, hoping to light the fuse of a billion dollar explosion.

There is always something special about being in an environment where others share your particular interests, especially if those interests were once despised in traditional culture and academia. In San Diego, the geeks and nerds have inherited the earth. No Moms throw away comic books, no kids get picked on for reading stories about dragons or alien worlds. To this is added the fact that many people attend in costume, expressing their special identity on the outside — I must have seen 25 Wonder Women, from the short and fat to the stunning, and from five-year olds to a few goddesses in their sixties. The best costume I saw this year was a Chef Darth Vadar, carrying a roasted Jar Jar Binks on a platter, complete with a spiced apple in Binks’s mouth. Film criticism can be funny! 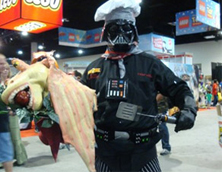 Comic-Con 2009 was advertised as featuring the highly anticipated first San Diego appearances of several geek Gods — James Cameron, Tim Burton and Peter Jackson, along with a stop by legendary (and legendarily reclusive) Japanese animation giant Hayao Miyazaki. On Friday, I waited over two hours in the hot sun in a very well-organized line to get into the famous “Hall H ," the 6,500 person venue where the big Hollywood events are scheduled. The hall has four huge, high-definition, 3-D-ready screens, so every seat is a good one.

Lasseter tipped his hat to his film school background at Cal Arts, showing a 1976 photo of his class, which also included Brad Bird, among others. Switching to his Disney hat, Lasseter then discussed traditional drawn animation. He screened a lengthy section of the 3-D conversion of "Beauty and the Beast," due for release in 2010. This was followed by a segment from Disney’s next big animated feature, "The Princess and The Frog," due at the end of the year.

Then Miyazaki was introduced, along with his translator. A humble, white-bearded man, Miyazaki is the godfather of animé, co-founder of Japan’s Studio Ghibli and the creator behind "Princess Mononoke" and "Spirited Away," among many other animated features. Miyazaki answered questions from Lasseter and the crowd, and then a segment of his next feature, "Ponyo," was screened. Miyazaki’s films often deal with the relationship of young girls to nature, family and the world of the imagination, and "Ponyo" follows these themes. It includes a stunning reimagining of the sea, as giant swells of huge fish, brought to life through animation, 180 degrees different from Pixar’s own "Finding Nemo," but equally fascinating.

Miyazaki was followed by UCLA’s own Shane Acker, who joined producers Tim Burton and Timur Bekmambetov ("Wanted"), and actors Elijah Wood and Jennifer Connelly, to preview "9,"Acker’s animated feature version of his Oscar-nominated UCLA thesis film of 2005. A stunning segment was screened. The film portrays a steampunk (or, as Acker prefers to call his style, "stitchpunk") alternate future, where rag dolls, relentlessly pursued by murderous machines, try to preserve a remnant of human culture. Acker made a point of praising the experience of film school and explaining that he brought several of his UCLA animation classmates into the production of the film. (See a list of additional Bruins on the "9" crew in the sidebar below.) The release date for the feature, 9-9-09, was prominently featured throughout the con as part of the full-on promotional effort.

Shane Acker ’98, MFA ’04 made a point of bringing along several of his talented classmates from the UCLA Animation Workshop when he went off to work on the feature version of his 2005 thesis film “9.” Their ranks include:

Peter Jackson, a true geek superhero, followed with a panel on his latest production, "District 9," accompanied by protégée writer-director Neill Blomkamp, a veteran of several short films, now happily promoting his first feature. Jackson began by discussing the status of the two "Hobbit" films he is preparing; script nearly finished, no casting yet done. "District 9" is a sci-fi feast about a huge group of refugee aliens who land on Earth, only to be penned up in a ghetto in South Africa and mistreated. The aliens’ advanced weapons, activated by “alien DNA ," become the subject of an arms race among the humans. The segment shown was packed with the WETA digital effects we expect from Jackson, while Blomkamp has shot the film in a cinéma-verité, news caught on the fly style that is ultra modern.

The convention floor, a space so huge you cannot see from one end to the other, packed with hundreds of booths and displays, and filled with tens of thousands of people at all times, is an experience unto itself. It features everything from expensive film studio displays to a booth that just sells period corsets for costumes; giveaways abound, and you can get your picture taken on the bridge of the starship Enterprise or in an electric chair. The constant flow of costumed characters — all willing to pose — completes the picture of an environment of, by and for the geek/nerd subculture.

This was a special year for me personally, as I was joined for the first time by my 15-year-old daughter, Rebecca. A passionate fan of Tim Burton, Peter Jackson, Miyazaki, Pixar, "Star Wars” and "Star Trek," she is already scheming on her costume for Comic-Con 2010 — Bat-Mite, Batman’s biggest fan from the Fifth dimension.