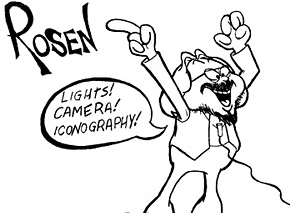 “For me personally, (Bob will) always be my most significant teacher, my mentor and a man who literally taught me how to think.” —Geoffrey Gilmore

A capacity crowd of faculty members, distinguished alumni and other well-wishers gathered at the Bridges Theater in May to salute the School’s outgoing dean, Robert Rosen. The founding director of the UCLA Film & Television Archive, who spent 11 years serving as dean, Rosen is stepping down, effective July 1, to concentrate on teaching film preservation, activities that have been the cornerstones of his career.

The tribute, produced by professor Myrl Schreibman and MCed by Chris Waterman, Dean of the School of Arts and Architecture, kicked off with a

short film clip created by UCLA animation professor Chuck Sheetz, director of many “Simpsons” episodes, in which Rosen was recreated as a “Simpsons” character on the family couch in the show’s famous opening sequence. Rosen was seen pontificating about film as Bart and Homer roll their eyes. The audience went wild for it.

From the podium producer Peter Guber (“Batman”), who has been teaching at UCLA for more than 35 years, announced the establishment of the Robert Rosen Fund at UCLA, which will further the preservation, programming and educational mission of the Film & Television Archive.

“Soul Food” creator and television writer/producer Felicia D. Henderson ’84, MFA ’04, who is pursuing a PhD at UCLA in Cinema and Media Studies, addressed Dean Rosen from the stage: “I hope you will allow me to be your life-long student.”

An item about the tribute on the “Variety” blog “Thompson on Hollywood” reprinted the text of a moving accolade to Rosen delivered by protege Geoffrey Gilmore MA ’79, ex-Sundance director and current Tribeca CEO:

"Bob Rosen is tonight being celebrated as a leader, an innovator, an archivist, an educator, perhaps even [as] someone whose career demarcated an end of truly selfless pioneers in the arenas of film preservation and education. But for me personally, he'll always be my most significant teacher, my mentor and a man who literally taught me how to think."