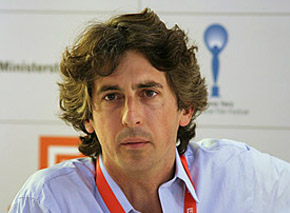 Payne is guest director at Telluride 2009

“Screen Daily” is reporting that alumnus Alexander Payne MFA ’90 will serve as a guest director at the 36th Telluride Film Festival.

"Festival co-directors Tom Luddy, Julie Huntsinger and Gary Meyer have invited Payne to select a series of films to show at the prestigious Colorado-based festival. The festival chooses a guest director each year, with past participants including Salman Rushdie, Peter Sellars, Don DeLillo and Slavoj Zizek."

"As with the rest of the program, Telluride will keep Payne's selections top secret until the festival kicks off on September 4."

"I have had the pleasure of knowing Alexander for many years – from the time he was a Stanford student who came to see rare films at the Pacific Film Archive in Berkeley and throughout his career," Luddy said. "I have long admired his work and his obvious love of the art of film. Our partnership with him on this year's Festival has been seamless."

"Payne has directed Oscar-winning “Sideways,” “About Schmidt,” “Election” and “Citizen Ruth.” His current projects include HBO TV series “Hung” and “Fork In The Road” for Fox Searchlight."