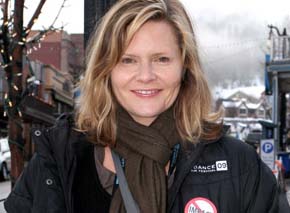 Gabbert has "No Impact" at Oscilloscope

“Daily Variety” reports the sale of the 2009 Sundance Film Festival hit “No Impact Man” to Oscilloscope Laboratories, which will release the film theatrically on September 4.

The feature documentary, directed by alumna Laura Gabbert MFA ’97 and Justin Schein, produced by fellow Bruin Eden Wurmfeld '03 and edited by Bill Haugse ’67, charts one man’s attempt to eliminate any trace of environmental impact from the lifestyle of his downtown Manhattan family.

“It’s the first time I’ve seen an environmentally concerned film with a strong comedic element,” said Oscilloscope chief Adam Yauch. “I still think about it every time I go to the supermarket.”

"Set for Sept. 4, the pic’s theatrical release will accompany the national launch of chief subject and author Colin Beavan’s not-for-profit No Impact Project, whose objective is to “encourage citizen engagement in finding solutions to our culture’s environmental and lifestyle crises.”