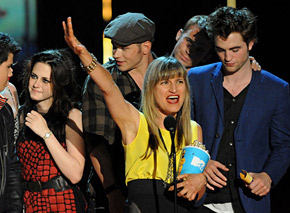 After taking the stage to accept the MTV Movie “Best Film” trophy for “Twilight,” the vampire romance that was one of the biggest theatrical and DVD hits of the past year, alumna Catherine Hardwicke is going from strength to strength.

On June 12, visited the Hyatt Regency Hotel in Century City to accept Women in Film’s coveted Dorothy Arzner Directors Award. This was an especially fitting tribute because Arzner, one of Hollywood’s first professional directors in the 1940s, was also an admired teacher at UCLA. Her work at the School is recognized by the Dorothy Arzner Memorial Award for graduate students in the Directing and Producers' Programs.

Hardwicke also has two major new film projects in pre-production, both well suited to her proven empathy for young adult characters and storylines.

According to “The Hollywood Reporter,” Hardwicke will soon take the helm of a new updated film version of Shakespeare’s “Hamlet:”

"Hardwicke is attached to direct, with Emile Hirsch, who helped conceive the idea, attached to star as the title character. Ron Nyswaner, best known for penning Oscar winner “Philadelphia,” will write the script. “Milk” producers Dan Jinks and Bruce Cohen will produce via their Jinks/Cohen banner."

Also on Hardwicke’s schedule is “Maximum Ride,” a potential franchise launch based on the popular young adult fantasy stories by novelist James Patterson. The five-volume series follows six teens, genetically altered to be part human and part bird, who learn to fly and escape the laboratory, only to be pursued by creatures that are part human and part wolf. Another TFT alum, Don Payne, is working on the screenplay.