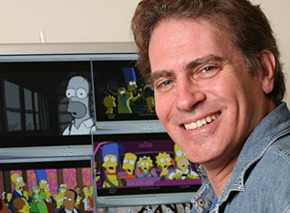 UCLA alumnus David Silverman ’79, MFA ’83, director of numerous episodes of the hit show “The Simpsons,” as well as the 2007 feature film based on the FOX series, will be honored as the first recipient of UCLA’s Outstanding Contribution to Animation award on Saturday, June 6, at 5:30 p.m. at the James Bridges Theater on campus.

The presentation will take place during UCLA’s Prom 2009 Festival of Animation, a UCLA tradition since 1959, which features an eclectic collection of new animated student films produced in a full range of styles.

“From the days of making his independent student films, whether he’s helping to launch ‘The Simpsons’ as one of the series’ first animators, playing his flaming tuba or directing ‘The Simpsons’ feature film, David has made an indelible impression on the animation industry,” said Celia Mercer, area head of the UCLA Animation Workshop. “Quite simply, his contributions have helped to shape the art of animation as we know it today.”

The Prom 2009 Festival of Animation is part of UCLA Festival 2009: New Creative Work, a nine-day celebration of the newest work by students from the UCLA School of Theater, Film and Television, which takes place at UCLA and other locations from June 5 through 13. The June 6 animation festival will screen at 5:30 p.m., with an additional screening at 8:45 p.m.

Admission to the animation festival is free, but space is limited and reservations are required. To R.S.V.P. and view a schedule of events, visit www.tft.ucla.edu/festival. Campus parking for the festival is available for $9 in Lot 3.

Born in Long Island, N.Y., and raised in Maryland, Silverman began drawing at age 4 and earned several student fellowships during his academic career, helping him focus on developing his abilities. After attending the University of Maryland, where he made the animated film "Surreal Estate” as an independent-study project, he transferred to UCLA in 1975 and began animation studies with professor Dan McLaughlin. He received his bachelor’s degree in 1978.

At UCLA, Silverman, who also played tuba in the UCLA Marching Band, completed two films, “The Strange Case of Mr. Donnybrook’s Boredom” and “Mariner Man.” After receiving his M.F.A. from UCLA in 1983, he did freelance illustration and animation work. In 1985, he served as an animator on the live-action film “One Crazy Summer,” which led to a job in 1987 animating “Simpsons” shorts for the “The Tracey Ullman Show.” Silverman went on to direct many of the early episodes when “The Simpsons” became its own series on FOX and eventually became supervising animation director and a producer on the show. To date, he has directed 22 “Simpsons” episodes, winning four Emmys.

In the midst of his “Simpsons” success, Silverman was wooed away by DreamWorks to co-direct “The Road to El Dorado,” then by Pixar to co-direct “Monsters, Inc.” He did writing and storyboard work on Blue Sky’s “Ice Age” and “Robots” before returning to “The Simpsons” at the end of 2003, when he was chosen to direct the much-anticipated “Simpsons Movie,” which was released in theaters in 2007.

Presently, Silverman has a number of projects in development, including a live-action feature.

The UCLA Animation Workshop has for nearly 60 years promoted a “one person, one film” philosophy, allowing animators of all types to realize their concepts independently. Graduates have been nominated for numerous Oscars and International Animated Film Society “Annie” awards. In 2007, alumnus Gil Kenan received an Oscar nomination for best animated feature for his directorial debut, “Monster House,” and the Silverman-directed “Simpsons Movie” collected seven Annie nominations. Current students have also been honored, with Joaquin Baldwin receiving an Annie nomination this year for “Sebastian’s Voodoo,” and Emud Mokhberi working as a member of the team that directed the Oscar-nominated “Oktapodi.” This year will also see the release of “9,” an expanded feature adaptation of alumnus Shane Acker’s Oscar-nominated UCLA thesis film, which will be produced by Tim Burton and Timur Bekmambetov.