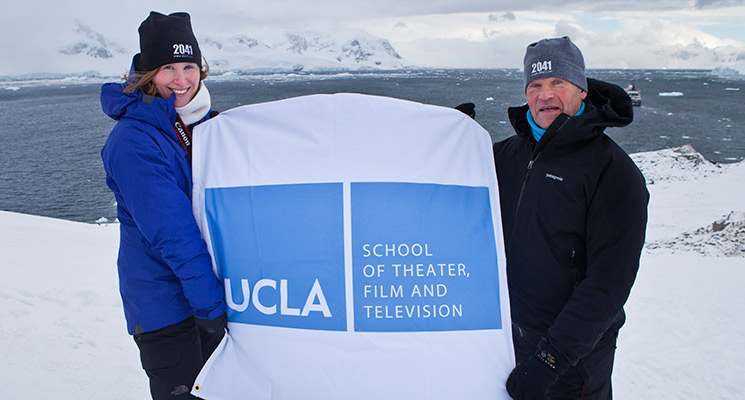 Home > UCLA TFT in the Antarctic

UCLA TFT in the Antarctic 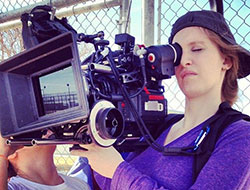 25-year-old UCLA TFT graduate student and emerging cinematographer Emma Kragen will be embarking on a journey of a lifetime to Antarctica as part of the International Antarctic Expedition 2015 with world-renowned polar explorer and environmental leader Robert Swan. The 13-day expedition will begin on Friday, March 13 in Ushuaia, Argentina, and will provide Kragen with an opportunity to film the expedition’s journey across Drake Passage and the Antarctica Peninsula. Kragen’s documentary will help to showcase firsthand effects of global climate change with the end goal of engaging people who are interested in creating a world of peace and sustainability.

Teri Schwartz created the opportunity for an outstanding TFT student to embark on this journey on the School’s behalf. It fits perfectly with UCLA TFT’s vision that re-imagines entertainment and performing arts education as an interdisciplinary enterprise grounded in humanistic storytelling, social responsibility, global diversity, and technology and innovation. Key to this vision is providing students with opportunities to develop and create stories that enlighten, engage and inspire change for a better world. Kragen was chosen not only for her excellent creative work but also for her ability to serve as an outstanding ambassador for UCLA TFT’s vision and mission.

“I am so pleased to provide this great opportunity to one of our UCLA TFT students,” states Schwartz. “Emma is an outstanding filmmaker, storyteller and cinematographer. She represents all that is exceptional about our amazing students. To go on this important and exciting journey with Robert Swan and his team is a once in a lifetime opportunity to use the power of story for good. Robert is dedicated to education and shares our deep belief in the power of story to drive social change. It is a great honor and privilege for Emma and for all of us at UCLA TFT to be associated with this remarkable expedition.”

Throughout her voyage, Kragen will be filming, tweeting and video blogging. In a ceremonial moment for Kragen and UCLA TFT, she’ll represent her alma mater when she unfurls a UCLA TFT flag at the tip of the Antarctic for a photo to commemorate her journey. During the expedition, Kragen will film footage of the journey to bring back to the States. She will create a short film that tells a dynamic story about the preservation of the Antarctic…but most importantly the Earth. This is a noble mission for Swan, Kragen and the other 78 participants from 25 nations, as they embark on an expedition at the end of the world that could potentially one day save the world.

“I’m very excited to take part in this once-in-a-lifetime experience,” commented Kragen. “I’ve always been interested in making films that have the potential to change the world, and I’m thrilled that the expedition with 2041 will give me the opportunity to do just that.”

Here are some photos of me taking shots of the terrain — and getting to know the local inhabitants, too! 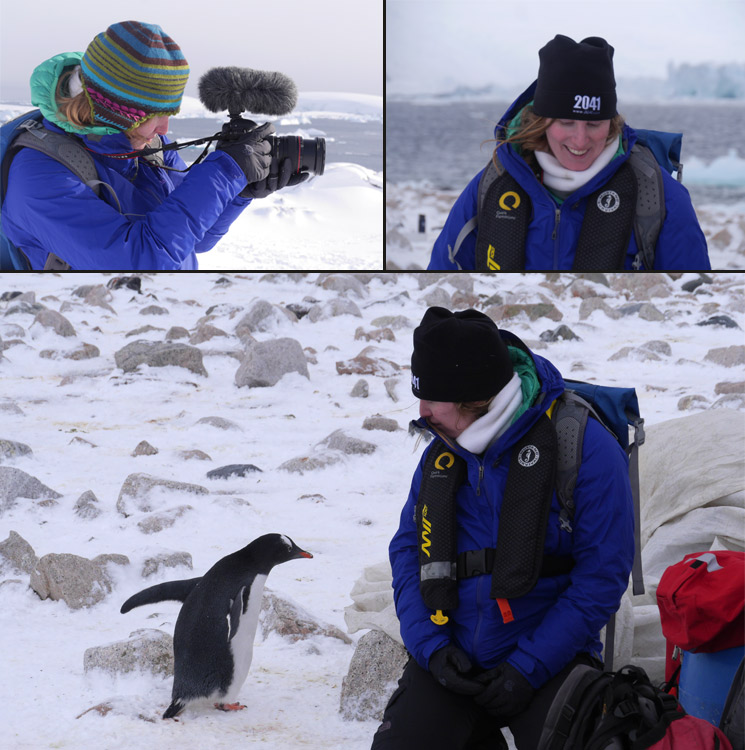 We ended up having what was apparently a fairly standard crossing of the Drake Passage, but managed to not see it at its worst (luckily!).

I quickly determined that I was not able to edit while the ship was moving, nor do very much of anything that required using my eyes. I didn¹t get nauseous, so that was fortunate. Moving around in general was fairly exhausting, however. I ended up sleeping quite a bit of the first day, and by the second day, the ship had smoothed out quite a bit as we entered into the Antarctic Peninsula.

Every morning on the ship we are awakened by a loudspeaker in our rooms that updates us about various things going on around the ship. The first morning was an earlier wake-up. We passed through icebergs in the early morning light and snow cascaded down around us. We were finally in Antarctica.

Later that morning, we went out on Zodiacs (small, inflatable raft-type boats) after breakfast. It was like entering an alternative dimension.

Icebergs grew out of the ocean and snowy mountains kissed the sky. We saw a group of penguins "porpoising" (jumping up out of the water like dolphins), shortly followed by a leopard seal that swam right next to our Zodiac and snagged one of said penguins. N.B.: Leopard seals play with their food. He chased the penguin for quite a while before actually eating it! We then saw another leopard seal basking on an iceberg, two crab-eater seals, a number of birds and blue-white icebergs as far as the eye could see. The water is also surprisingly clear!

In the afternoon, we did a shore landing where there were hundreds of penguins (my dream). They are amazingly curious and if you sit down they will potentially come right up to you and even sit in your lap. I didn¹t get this indulgence, but you can imagine how elated I was by their proximity. The one unfortunate thing about them is that they are kind of smelly.

The expedition is divided into eight groups and during that same afternoon, each of the groups took part in ropes challenges in preparation for a later part of the expedition when they will have to use these methods to cross larger crevices. Once we reached the top of the mountain where the groups were doing their exercises, the sun was visible. It was the most amazing magic hour you could dream of (image content to follow upon my return).

The next day, we took Zodiacs to the shore for people to take photos with Rob, their company or school flags. The groups also continued to do team-building exercises as they hiked up a mountain (might I add that, as the videographer, I am actually an "independent," so I move between the groups interviewing people and filming them, but do not actually belong to one).

Instead of first going to shore, however, I went with a group of other filmmakers (there are a group of us filming for various types of things) and took an extended Zodiac cruise where we saw a series of minke whales and even a humpback! It was a windy day, so after a few hours in the Zodiac I was starting to lose feeling in my hands and toes, even with two layers of gloves and hand-warmers, coupled with three pairs of socks and boots. Ultimately, we went ashore, where we met more curious penguins, and I, too, took my picture with Rob and the UCLA TFT flag!

In the afternoon, the sun came out and we took another Zodiac cruise, where we spotted more minke whales. Last night was also the night where people could opt to spend the night on shore. No, eager reader, I did not participate, because my evening¹s editing work did not allow it, and the vacant ship was an ideal place to get work done.

This morning we went out for yet another Zodiac cruise in a cove that is full of whales. In most places, it is considered exciting to glimpse a whale on a day of whale watching. Here, it is so commonplace, that the whales actually "hang out" at the surface of the water, and you can expect to see at least four or five over a short period of time. Today the sun is out and the lighting is gorgeous, so lunch was out on the deck. A little cold for outdoor dining in my opinion, but yesterday's lunch was also outside and I opted to remain inside (it was windy, and I'm a native Angeleno), so I thought that today would be a good day to dine out in Antarctica.

This afternoon, there will be another shore landing for the groups to do some reflection exercises, which means that it will be another opportunity for me to capture the amazing surroundings that are Antarctica.

Only two days left in this pristine environment, and then we will return across the Drake Passage to Ushuaia. I hope to upload a few images when I arrive in Buenos Aires.

Day One of the Expedition

The expedition has officially begun. I moved into the hotel yesterday, and am already fully immersed into the program. My primary responsibility with 2041 and the expedition is to shoot and edit the video that everyone gets to take home at the end of the expedition. This means that I am essentially in charge of documenting almost all of the goings- on throughout the expedition, and cutting together the footage each evening in preparation for the final night aboard the ship when they will screen the film. I will post that film upon my return!

This morning was officially considered Day 1 of the expedition. Rob Swan introduced the expedition, and a number of other speakers also introduced ideas about leadership as well as climate change. We then went on a hike to a nearby glacier that has begun to recede into the hillside, and has thus become less and less of a "glacier" over the years. Our first visible representation of climate change of the trip. In my video clip, I included some footage of said glacier, as well as myself at its summit. As we reached the top, it began to hail, which for me, means that my primary job became shielding the camera from bullets of ice. The hike served as essentially a test to prepare "team members," as we are called, for the terrain and climate of the Antarctic.

Tomorrow afternoon we will cross the Drake Passage for Antarctica! Keep good thoughts for an easy crossing, as it can be quite rough at times! My video and photo feed will be limited during this time, so look for brief textual updates along the way, and an influx of posts upon my return to internet- land after March 25.

Preparing to leave from Ushuaia, Argentina

About the Expedition: The expedition will be led by polar explorer Robert Swan, OBE, the first man to walk both the North and South Poles and the founder of 2041, an organization that is dedicated to informing, engaging and inspiring the next generation of leaders to take responsibility, to be sustainable, and to know that now is the time for action in policy development, business generation and future technologies. 2041 refers to the year in which a multinational agreement, the Protocol to the Antarctic Treaty, is up for re-negotiation. The treaty went into effect in 1991 and was created to protect the Antarctic environment, ecosystems, wilderness and aesthetic values as an area for the conduct of scientific research essential to understanding the global environment. Currently, any activity relating to mineral resources, other than scientific research, is prohibited. However, this could change if there is a binding legal regime on Antarctic mineral resource activities once the protocol expires.

“The diverse team we have pulled together for this expedition is made up of inspiring individuals who have the opportunity to ignite change,” says Swan. “I’ve been to the Antarctic 35 times in my life and everyone who takes the journey with me returns to their home as great champions not only for Antarctica, but for local issues in their own nations.”

International Antarctic Expedition 2015 will be filled with adventure, danger and intense cold, thousands of miles away from other civilians on a frozen, unpredictable ocean. On past expeditions to the Antarctic, Swan and his team have pulled out more than 1,500 tons of twisted metal left behind on the deserted natural treasure. The key to the expedition is the preservation of Antarctica and our survival on Earth which are synonymously linked together. We have 26 years to preserve the Antarctic, and this expedition is a grassroots effort to initiate change