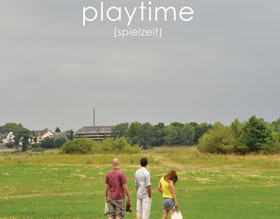 Students in the UCLA School of Theater, Film, and Television have much to be proud of, as one of their own will be premiering at the prestigious Sundance Film Festival in January.

The film, called PLAYTIME (Spielzeit), will compete in the International Shorts program in Park City, Utah January 19-29, 2012, making the Cut of 63 Films from Over 7,600 Submissions.

Inspired by Billy Wilder’s People on Sunday (Menschen am Sonntag), Playtime (Spielzeit) is a seamless journey through German youth and innocence on a Sunday afternoon.

The film is a product of a unique collaboration between the UCLA graduate film school and the Internationale Filmschule Köln (ifs) in Germany, designed to study and create works to honor the German-American exile filmmakers of the 1930’s. With Wilder’s ‘Sunday’ as the starting point, Playtime (Spielzeit) was born. The film was shot entirely on location in Cologne, Germany through this international filmmaking and cultural exchange.

The film features Marylu Poolman, Markus Klauk, and Jan Müller, all of whom can be seen regularly on German television, including Poolman’s role of Anna Weigel on Germany’s most popular daily soap Unter Uns, and Pietshow, twice nominated for an International Digital Emmy.

Mireles, a Texas native, has seen his films screened at Slamdance and SXSW, while Nolte and Becker have had their work featured at Festival de Cannes. Slattery won both audience and jury prizes at UCLA’s Festival of New Creative Work.

For more information, and to download a press kit and high-resolution stills, please visit the film’s website at www.playtimemovie.com.