Home > About > Executive Board > Philip I. Kent 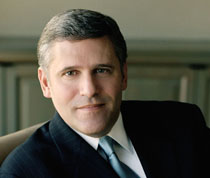 He served as the President and Chief Operating Officer of CNN America Inc. and Cable News Network LP LLP. He served as President of Turner Broadcasting System International, the division charged with overseeing Turner's wide-ranging business activity in Asia, Europe and Latin America, including all sales, distribution, business development, joint partnerships and business alliances outside of the United States. At the helm of TBSI, Mr. Kent led a regionalization strategy that introduced local-language versions of CNN and the Turner entertainment networks around the globe, further strengthening its position in critical international markets. He served as the President of Turner Home Entertainment, Inc., a division comprised of its home video, new media, licensing & merchandising, feature distribution and book publishing operations. He joined Turner in March 1993. He served as a packaging agent in television department at Creative Artists Agency (CAA). Mr. Kent was responsible for packaging and marketing some of the most successful series on pay cable at CAA.

In 1981, he was one of a two-person team that started Blair Entertainment, the television syndication division of John Blair & Co. Over a five-year period, he helped build Blair Entertainment into a major television and radio production and syndication company, overseeing production of a variety of live concerts, game and talk shows and daytime dramas. In 1984, he was promoted to Vice President of Program Development of John Blair & Co. He began his career in 1975 at Blair Television, where he worked on a special sales team designed to increase local television spending through presentations to the top management of major advertisers and their agencies. From August 2000 to August 2001, Mr. Kent served as President and Chief Operating Officer of CNN News Group, where he oversaw a strategic reorganization of the news business. Also during his CNN tenure, he initiated a sweeping redesign of CNN Headline News and the site selection, construction and implementation of a new Manhattan street-side broadcast studio, and was instrumental in high-profile hires including Lou Dobbs, Aaron Brown and Paula Zahn. He serves as the Chairman Emeritus of The Advertising Council, Inc. He served as Vice Chairman of The Advertising Council, Inc. Mr. Kent serves as a Director of National Cable & Telecommunications Association, the Metro Atlanta Chamber of Commerce, Atlanta's Woodruff Arts Center and the Atlanta Braves. He holds BA in Economics from Lehigh University.