Home > About > Executive Board > Goldie Hawn 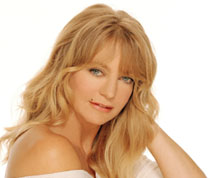 Goldie Hawn is an Academy Award-winning actress, producer, director, best-selling author and children’s advocate. She is the founder of The Hawn Foundation, a public nonprofit with a mission to equip children with the social and emotional skills they need to lead smarter, healthier and happier lives. Working with leading neuroscientists, educators and researchers, the Foundation developed MindUP™, an evidence-based curriculum and teaching model for grades K-8 that provides children with the social and emotional tools to improve academic performance. MindUP™ is currently being taught in schools in the United States and Canada, and is in the process of broadening globally. Hawn has received many honors for her work with children. Among them, the Substance Abuse and Mental Health Services Administration (SAMHSA) presented her with a special award for her work to increase public understanding of mental health.

Hawn is one of the most recognizable and beloved actresses in Hollywood. In 1969, she won a Best Supporting Actress Academy Award for her work in Cactus Flower (1969), appearing alongside Walter Matthau and Ingrid Bergman. Since then, she has starred in more than 30 films including The Sugarland Express (1974), Death Becomes Her (1992), Everyone Says I Love You (1996) and The First Wives Club (1996). In 1981, Hawn earned a second Academy Award nomination for her starring role in Private Benjamin (1980), for which she also served as the executive producer. She has been nominated for Golden Globes nine times, including one for her starring role in The Banger Sisters (2002) opposite Susan Sarandon.

Hawn made her directorial debut in 1997 with the TV movie Hope, starring Christine Lahti, Jena Malone and Catherine O'Hara. In 2005, she published a best-selling memoir, A Lotus Grows in the Mud. Her book 10 Mindful Minutes was published in September 2011, offering guidance on raising healthy, joyful and resilient children. Hawn is the mother of four grown children: Oliver and Kate Hudson, Wyatt Russell and stepson Boston Russell.