Home > About > Executive Board > Kishore Lulla 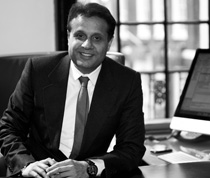 Lulla has more than 30 years of experience in the media and film industry. While spearheading the strategic direction and growth of Eros International, in 1999, along with Lakshmi Mittal and Gokul Binani, he founded the B4U Network to provide Bollywood content online.

Lulla is a member of the British Academy of Film and Television Arts (BAFTA) and of the Young Presidents' Organization. In 2007, he was honored at the Asian Business Awards and the Indian Film Academy Awards for his contribution in taking Indian cinema global. In 2010 he was named Entrepreneur of the Year at the GG2 Leadership & Diversity Awards.

In 2010, Lulla and his family set up the Eros Foundation to help in the education of children in the poorest regions of India. The Eros Foundation provides high-quality learning, teaching and support for targeted communities caught in cycles of poverty so that they can have real opportunities to change their futures and their communities. Though the development of knowledge, skills and understanding of the world, as well as a core set of values, individuals are empowered to become thoughtful, reflective and responsible citizens who contribute positively to their community. This will, in turn, lead to the development of self-sustaining communities.

Lulla graduated with a bachelors' degree in arts from Mumbai University and attended the School of Business and Law at the Government & Law College, Mumbai.