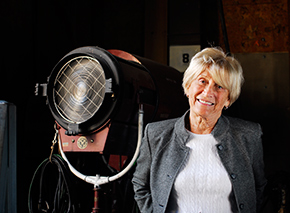 An award has been established at the UCLA School of Theater, Film and Television (UCLA TFT) in the name of Professor Barbara Boyle, a former film executive and Women in Film Crystal Award recipient.

Dr. Albert Dorman, Boyle's brother and founding chairman of Los Angeles-based AECOM Technology Corp., has created the Barbara Boyle Promising Producers Prize in the UCLA TFT Producers Program in honor of Boyle's milestone birthday, which took place on August 11, 2015. The award will carry on Boyle's legacy in educating future filmmakers.  Beginning in 2016, the award will be given to a UCLA TFT Producers Program student who is presenting in the annual Producers Marketplace during UCLA TFT's Student Film Festival, which honors students, alumni and industry leaders.

In 1957, Boyle entered UCLA School of Law as one of four female law students in a class of 140.  It was this independence and drive that made Boyle so successful in her career.  From 1982 to 1986, as a film company executive, she oversaw production of The Terminator and Platoon. In 1990, she co-founded Sovereign Pictures with offices in Los Angeles and London. As an independent producer, she made Phenomenon, one of the top-grossing movies of 1996. Her films have been nominated for 22 Academy Awards. In April 2003, she stepped down from the presidency of Valhalla Motion Pictures (Ang Lee's Hulk) to accept the post as chair of UCLA TFT's Department of Film, Television and Digital Media, where she served for nine years. She is currently the Associate Dean of Entrepreneurial Activities and Special Initiatives at UCLA TFT. Boyle is past president of both Film Independent and Women in Film. In 1999, she received the esteemed UCLA School of Law Alumni of the Year award.

"How does one find the words to describe an industry legend, an outstanding colleague, an inspiring mentor, the most loyal, wise and generous of friends, all forged into a brilliant diamond of a human being," says Teri Schwartz, Dean of the UCLA School of Theater, Film and Television. "That is Barbara Boyle – whose heart and mind are as big as the sky. The world is a far greater place because Barbara is in it."

Adds Cathy Schulman, head of production at STX Entertainment and President of Women in Film, Los Angeles: "I can think of no one better than Barbara Boyle to be honored with the namesake for the UCLA TFT Promising Producers Prize. Barbara has been my guiding mentor since the day I met her over 25 years ago, and her absolute commitment to making aspirational moviemakers the best that they can be is unmatchable."