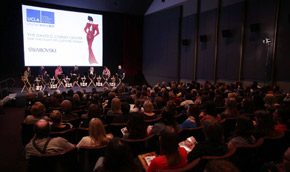 2015 Academy Award nominees Mark Bridges (Inherent Vice), Jacqueline Durran (Mr. Turner) and Anna B. Sheppard (Maleficent), as well as Ruth E. Carter (Selma), Kari Perkins (Boyhood) and Albert Wolsky (Birdman) — representing three of the eight films nominated for the Best Picture Oscar — were the panelists at the fifth annual Sketch to Screen Costume Design Panel and Celebration. Presented by Swarovski, Dean Teri Schwartz and TFT’s David C. Copley Center for the Study of Costume Design, the event took place on Saturday, Feb. 21, 2015, one day before the 87th Academy Awards ceremony at the Dolby Theatre in Hollywood. Due to the popularity of the event, Sketch to Screen moved this year from its former home, UCLA’s James Bridges Theater, to the university’s larger Schoenberg Hall. Variety was a media sponsor.

On the eve of the Academy Awards each year, Deborah Nadoolman Landis, Chair and Founding Director of the Copley Center, welcomes a stellar group of international costume designers to the UCLA campus to discuss their craft. With Professor Landis moderating, the Sketch to Screen panelists engage in a thought-provoking panel discussion about the central role costume designers play in cinematic storytelling. Audience members are given an invaluable look into some of the most successful creative minds in Hollywood.

This year, for the first time, Sketch to Screen was a ticketed event. Proceeds supported UCLA TFT’s David C. Copley Center for the Study of Costume Design, which provides a home for the research and the study of costume design history and the influence of costume design on film, fashion and popular culture. The Center serves UCLA TFT students, filmmakers, costume designers and scholars. Ticket pricing options started at $10 for general admission and went up to $500, which gave patrons a number of benefits including admission to the Hollywood Costume exhibition, which was curated by Professor Landis and located at the future home of the Motion Picture Academy Museum before it closed on Monday, March 2.

In 2016, the sixth annual Sketch to Screen Costume Design Panel and Celebration will take place on Saturday, Feb. 27.