Through the Camera Lens 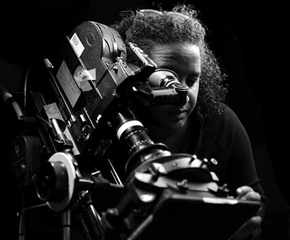 Raised by a single mother, Lucretia Stinnette learned to be independent early in life. From the age of 9, she was already taking two subways to her elementary school on Chicago’s Gold Coast, nearly an hour away from her own North Lawndale neighborhood. Evenings were typically spent alone as well, since her mother, working two jobs to make ends meet and provide a better life for her daughter, often didn’t come home until the wee hours of the morning.

This unfettered childhood led Stinnette, a fourth-year graduate filmmaker at the UCLA School of Theater, Film and Television (UCLA TFT), to become, she says, “very self-sufficient and not afraid of anything”; traveling alone, years later, to such exotic locales as Mongolia, Cuba and Nepal was done without hesitation. It was during the course of her travels, when she worked as an English teacher in Seoul, South Korea, that Stinnette first encountered the women who would later be the inspiration for her UCLA TFT second-year short film, Quyen. It’s a project close to her heart and one that has brought Stinnette numerous accolades including a 2014 Princess Grace Graduate Film Scholarship from the Princess Grace Foundation-USA. Stinnette was one of six awardees in the foundation’s film category handed out at an Oct. 8 gala at the Beverly Wilshire Hotel. (Other categories include theater, playwriting, dance and choreography.)

“As a faculty, we nominated Lu for this very prestigious award,” says Professor Becky Smith, one of Stinnette’s mentors on the project. “We were looking for a student whose entire body of work was very strong and would impress the Foundation. Lu's work is consistently among the very best at UCLA TFT — and Lu herself is a committed, humanistic filmmaker who, we felt, exemplified the qualities the Foundation is looking for.”

Quyen, which means “bird” in Vietnamese, is the story of a young Vietnamese woman who is adjusting to an arranged marriage in South Korea, a common phenomena in a country where a declining female population, particularly in the countryside, has spurred a thriving “mail order bride” industry backed by the Korean government. (Ancillary businesses, such those that teach foreign women how to be “good Korean wives” before they even set foot in the country, have sprung up as well.) International marriages have tripled since 2003 and most of the women who enter into arranged marriages do so for economic stability. In 2012, 9% of marriages in South Korea were to foreign nationals, unusual in a country where unions with non-Koreans used to be rare.

Like most Westerners, Stinnette was initially put off by the concept. However, after she began teaching English to these women, who primarily came from Vietnam, China and Cambodia, she became a sympathetic observer. While there were those who were abused and abandoned, the majority of the women she encountered were treated well, loved their children and doted on their husbands. When the time came for her to create her short film at UCLA TFT a few years later, she knew she had to return to Korea to tell the fictional story of one woman’s experience.

It was a “huge, risky decision” to film Quyen in Korea, Stinnette says, citing costs and the seven weeks she spent there filming during Winter Quarter 2013, but the risk paid off: The response to the film has been nothing short of fantastic, earning her additional accolades including the Lynn Weston Fellowship in Film, the Women in Film Foundation/Verna Fields Memorial Fellowship and the Four Sisters Scholarship in Directing.

“Quyen is a deceptive film,” says Smith. “It feels small and simple as you begin to watch it, filled with silences and simple interactions. But it is a film where each moment, and every line of dialogue, builds subtly to a sympathetic and complex picture. Lu manages to make us sympathetic to [her characters] and their personal struggles.”

Stinnette says of her filmmaking style: “I like telling stories about people who make difficult decisions, looking at why they make those decisions and allowing the audience to understand and get a window into their psyche. I like subverting stereotypes and challenging people to think about things differently than they thought about them before.”

Stinnette's route to becoming filmmaker was a somewhat circuitous one. She was already a film buff when she arrived as an undeclared freshman at the University of Southern California in 2000, but at the time didn’t know how to translate that love into a potential career. Instead, she decided to pursue a degree in international relations to satisfy her passion for politics and travel (she spent a semester in Ghana and another in South Africa).

After graduation she worked in a San Diego law firm and was headed for law school but a career in film — she had since locked into the notion of becoming a film director — was never far from her mind.

“I had an idea the whole time that I wanted to do this but I was scared to go after it,” she says. “I didn't think it was possible.”

Abandoning the idea of becoming a lawyer, she left the law firm after three years and, at the invitation of some friends, went to South Korea to figure things out. During her time there, without any formal training, she made her first short film.

“At the end of the day it wasn’t something that I would ever show anyone,” Stinnette says, “but at the same time, the process just felt so right. I loved being on set. I felt that I was doing the right thing.”

She looked at film schools for two years, and wanting to return to Los Angeles, applied to UCLA TFT. She began in Fall 2011.

She credits Professors Smith, Rory Kelly and Gyula Gazdag with helping her grow as a filmmaker.

“Rory was instrumental in my transition from first year to the second,” Stinnette says. “After the first year, I still didn't quite understand the mechanics of telling a story for the screen and wasn't quite confident in my abilities. After taking Rory's class, I felt much more confident to shape a scene and capture all the beats necessary to tell a story.

“I feel incredibly lucky to have Becky as a mentor,” Stinnette continues. “Not only is she phenomenal at her work, but she also goes above and beyond to support students. Sometimes as a filmmaker, I hit a low point, when I'm not sure what to do. I often turn to Becky during these times and she has a really intuitive way of helping students figure out how to solve problems. She has been incredibly consistent with her support and positive encouragement of my work...and Gyula is a real gem. He’s a great guide in helping his students understand how to bring the story out of themselves, and shape it into what it is supposed to be.”