Two graduate costume design students have been announced as winners of 'Art of Fashion 2014: A Design Competition' 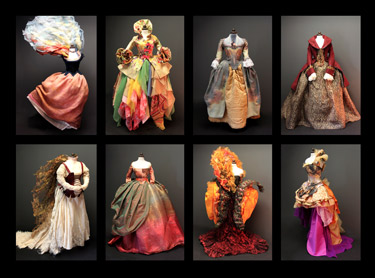 On Saturday, Feb. 8, graduate costume design students Adam Alonso and Caitlin Doolittle were announced as the winners of Art of Fashion 2014: A Design Competition. They were each presented with a $5,000 scholarship at The Timken Museum of Art gala dinner celebration in San Diego.

Dean Teri Schwartz, Department of Theater Chair Michael Hackett, Deborah Nadoolman Landis, Professor and Founding Director of The David C. Copley Center for the Study of Costume Design, and Zandra Rhodes, international fashion icon and designer, were the honorary chairs of Art of Fashion, which The Copley Center co-hosted with the Timken. The competition entailed eight UCLA TFT graduate student costume designers creating half-scale costumes inspired by Thomas Gainsborough’s 1788 painting, “A Peasant Smoking at a Cottage Door,” which is on extended loan to the Timken from UCLA’s Hammer Museum.

The unique perspectives of the students, who come from as far away as central China to those from New York, Louisiana, Nebraska, Oregon and California, were reflected in their creations, which ranged from historically accurate 18th-century fashion to theatrical fantasy to the contemporary catwalk.

Rhodes and an honorary “Pink List” committee judged the designs at a private dinner in late January. Timken board member and UCLA alumna Lori Walton and her husband, Basketball Hall of Famer and UCLA All-American Bill Walton, were co-chairs of both events.

During the award celebration dinner reception, Professor Landis revealed the competition criteria and shared the judges’ impressions. Guests had the opportunity to examine the costumes in detail and talked with the designers about their creations. All but the winning costumes were auctioned during the gala evening for the benefit of the Timken Museum and the UCLA School of Theater, Film and Television Design Fund.

“A Peasant Smoking at a Cottage Door” is featured in “Object Lessons: Gainsborough, Corot, and the Landscape of Nostalgia,” which runs through Sunday, April 6. It is one of the artist’s most famous examples of the idealized rustic genre featuring a scene of happy peasants resting after a hard day of labor. It is shown alongside Jean-Baptiste-Camille Corot’s “View of Volterra” from the Timken’s permanent collection. The masterpieces, which are 50 years apart, demonstrate how landscape painting changed at the end of the 18th and beginning of the 19th centuries.

For more information about the Copley Center, please click here.