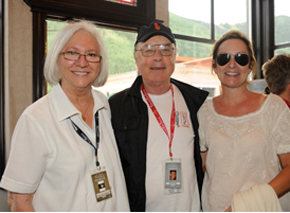 On Sept. 5, the School of Theater, Film and Television successfully concluded an inaugural program with the Telluride Film Festival dubbed FilmLAB. The initiative brought 10 of the school’s top MFA/PhD filmmakers, named Film Lab Fellows, to the festival. TFT alum and executive board member Frank Marshall is the founding sponsor of the newly launched program.

On the last day, the contingent, all final-year graduate students, also met with the co-directors of the festival, Julie Huntsinger, Tom Luddy and Gary Meyer. One of the students, Julio Ramos, had his Spanish-language short, "A Doctor's Job," about a financially pressed doctor who moonlights as a cab driver, presented at the festival.

“We’re delighted to be involved in this kind of real strategic alliance with Telluride. A partnership like this between two major cinematic institutions is very exciting,” says Dean Schwartz. “We’re the only school that has anything like this with any festival in the world.”

Meeting with director and TFT alum Alexander Payne, who showed his film "The Descendants" at the fest, to critical acclaim, was a highlight for Dean Schwartz.

“Alexander was tremendously generous with his time, ideas and inspiring advice,” she says.