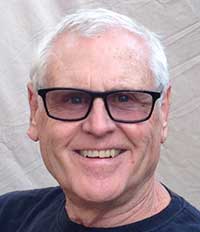 Screenwriter Jim Strain has been teaching graduate-level screenwriting courses at UCLA TFT since 2000.

His feature film credits include the original Jumanji (1995) and Summer of the Monkeys, both co-written with Greg Taylor; Space Warriors, co-written with Stan Chervin; and Bingo. With Stephen Chiodo, Strain co-wrote Alien Xmas, a children’s book that won a Saturn Award in 2006 from the Academy of Science Fiction, Fantasy, and Horror Films. More recently, he wrote the first three episodes of Netflix’s Dolly Parton’s Heartstrings, an anthology series launched in 2019.

A native of Denver, Colo., Strain received a B.A. in communications from Phillips University in Enid, Oklahoma; an M.A. in journalism from the University of Missouri; and an M.F.A. in screenwriting from the UCLA School of Theater, Film and Television.